Haunted Highways is headed to Silver City in Idaho. At least the nice gentleman is not claiming it is ghosts from some random indian burial ground. He claims it is haunted by various people who died in the hotel. The other building, a Masonic Lodge [and a rather lovely one at that, looking to be under renovation] seems to be haunted by deceased Masons who were given their final service there. Again, at least no random dead indians wandering around.

I find I am a trifle worried at their safety as they prepare to wander around a building with very apparent structural damage including missing walls, floors and ceilings in the dark with infrared cameras and barely any visual light. Better them than me!

I do find it bothersome that they seem to totally miss the connection between old buildings, lack of maintenance and funky sounds. We have a relatively new house and it still makes little creaks and groans in the silence of the night. I have stayed in some fairly old buildings over the years, and heard little rodent scrabbles in the walls, little creaks and groans as the wood shifts and settles after someone has moved across a floor. I have lain in bed in the dead silence of a power outage in a winter storm and listened as someone in the building moved around and sounded like someone was walking about in my otherwise empty apartment.

All things considered, not as sensationalized as it could have been – no orbs or shadows. Just some footstep sounds, a door opening and a hatch slamming. Haunted? Other than the creepy footsteps, nothing that really couldn’t be explained by the general age and decrepitude of the building. And to be honest, someone could have snuck into the building and made the footsteps.

Part 2 is an animal hunt. The Shunka Warakin is a mystery wolf-hyena unknown. They get a cute goat. They hang out in the dark and run around with pretty much no lights and an infrared camera. They do see what appears to be a wild dog, but no monster. But they had a cute goat. 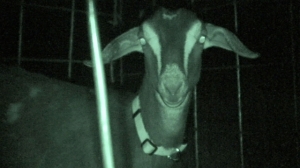